Choosing the Best Probiotic for You The word 'bacteria' often comes with negative associations, such as: germs, sickness, and disease.

The truth is, the body is home to trillions of microorganisms that are necessary to live a healthy life.

Did you know: there are about 10 single-celled microbes for every cell in your body? That averages about 2.2 pounds of your body weight!

Probiotics are live, friendly bacteria that live in the body and keep your digestive system in order.

They patrol your intestines and keep your digestive system balanced by helping digest food, destroying harmful pathogens, and producing vitamins.

Probiotics are especially helpful after a round of antibiotics. Antibiotics are known to kill both infectious and healthy bacteria.

When healthy bacteria are killed off, the balance of bacteria in the gut is compromised, leading harmful bacteria to flourish. This creates diarrhea or other digestive troubles.

HOW TO CHOOSE THE BEST PROBIOTIC FOR YOU

Having a balanced, healthy gut flora means an abundance for your health, digestion, well-being, and even beauty.

We now know that there’s ongoing communication between your GI (gastrointestinal) and your brain, known as the gut brain axis. This means a healthy gut not only benefits the regularity of digestion, but also cognitive function like mood and depression. There are even links to healthy gut flora and appearance of your skin.

There is still a lot more research to be done to fully understand the benefits of different probiotic strains.

However, we do know that not all probiotics are created equal. For instance, lactobacilli live in our digestive, urinary, and genital systems.

This probiotic strain can also be found in some fermented foods like yogurt.

Bifidobacteria are typically found in the intestines as lactic acid bacteria, and can also found in fermented foods. It is important to take a strain that is most likely to benefit you. 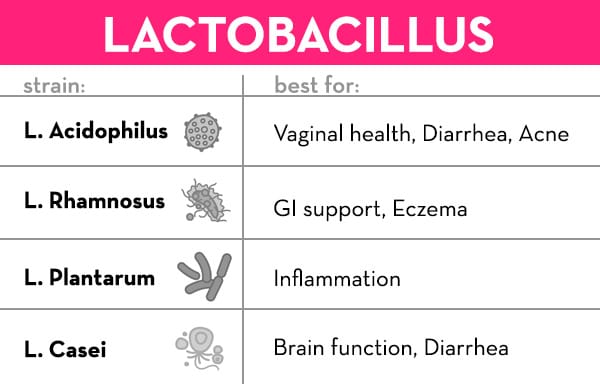 This is the most commonly recognized probiotics. L. acidophilus consumption has been dated back to the 1920s when doctors would recommend acidophilus milk to treat constipation and diarrhea.

These microbes are able to survive stomach passage and populate in the intestine. Other research suggests that it has been demonstrated in humans to reduce problems associated with lactose intolerance and even decrease the risk of colon cancer.

However, the strain isn't only useful for its digestive help.

An experiment followed 300 patients who took a probiotic mixture of L. acidophilus and L. bulgaricus.

They documented that 80% of patients who suffered from acne some degree of clinical improvement, particularly effective in inflammatory acne.

In addition, an Italian study involving 40 patients found L. acidophilus and B. bifidum supplementation produced better clinical outcomes in acne as well as better tolerance and compliance with antibiotics.

L. Rhamnosus is suggested to be the most studied probiotic in adults and children.  Evidence suggests that it also colonizes the intestine.

Gut flora may be disrupted during travel, and healthy bacteria is killed off when one is taking antibiotics. Rhamnosus GG has been found especially beneficial for treating diarrhea associated with these cases.

Another interesting study found that this strain was also potentially beneficial in preventing eczema.

The babies that were supplemented the probiotic during childbirth were half as likely to develop atopic eczema by the age of four than the babies who did not.

A study found that the strain could suppress an inflammatory response in the gut.

Some research shows exciting results with L. casei in regards to digestive support and regulating diarrhea.

One study on the effect of milk fermented by L. Casei strain DN-114 found that the consumption of it significantly reduced the incidence of diarrhea.

The randomized, double-blind, placebo-controlled pilot study found supplementation with 24 billion units of the L. casei strain Shirota led to a rise in probiotics lactobacillus and bifidobacterium, as well as a significant decrease in symptoms of anxiety and depression. 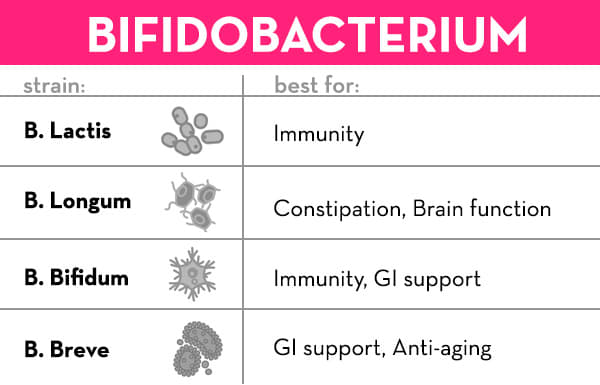 B. Lactis is a good choice in order to boost the immune system.

In one study, researchers had participants taking either a probiotic or a placebo for six weeks.

At the end of this period, patients had their antibody levels measured and found greater increases in antibodies of the B. lactis group than in placebo participants, which suggested that the probiotic may help improve immune function.

In addition, a 2009 study found that supplementation of the strain B. lactis DN-173 led to self-reported improvements in digestive comfort.

One of the first bacteria to populate in our bodies is B. longum.

They ferment sugars into lactic acid, which helps stabilize the acidity of the GI tract and hinder growth of harmful bacteria.

In one study with adult subjects prone to constipation, taking a mix of B. longum BB536 with milk or yogurt for two weeks increased bowel movements.

B. longum was one of the species researched for the role of probiotics in the gut brain axis mentioned earlier.

Researchers from University College Cork found in a study of healthy men that taking B. longum 1714 caused their stress levels to decrease and memory to improve.

Many factors can deplete the body's supply of B. bifidum; such as: time, stress, and diet.

Researchers found that these microbes can help regulate the immune response, your body’s first line of defense against infection.

It has also been found that B. bifidum may prevent intestinal pathogens or digestive disrupters from flourishing in the gut.

This is important in order to restore the bacterial balance and optimize digestion.

Clinical research suggests it supports a significant reduction in IBS symptoms, an improvement in quality of life and even helps relieve occurrences of ulcerative colitis, a chronic inflammatory bowel disease.

One study found that B. breve was effective in increasing bowel movements in children with constipation.

The same researchers also found a positive effect in stool consistency and relief in abdominal pain.

Another study looked at the benefit of probiotics on skin ailments and found a fascinating trend. B. breve B-3 could possibly be used to prevent photo-aging induced by chronic UV irradiation.

This ability to reduce the detrimental effects of UV exposure in sun damage is great news. This lets the body keep skin plump, hydrated, and youthful.

Not to be confused with the bacteria that causes strep throat, some species and strains of streptococcus have promising research on the benefits for health and well-being.

Research suggests that this probiotic may indicate a possibility to prevent diseases.

A study on S. thermophilus in combination with L. casei and L. bulgaricus found reduced incidence of antibiotic-associated diarrhea with supplementation.

There is also promising research on this species for supporting skin. Ceramides are natural lipids that make up the surface of the skin structure.

Therefore, depleted ceramide levels are associated with dry and damaged skin. S. thermophilus was shown to have an effect on the level of ceramides in the barrier of the skin.

This means it aids in protecting underlying tissue from infection, dehydration, and chemicals. These skin-supporting microbes also act as antioxidants in the body, trapping reactive forms of oxygen that dry, damage and age the skin.

WHAT TO LOOK FOR

Be sure to check for any expiration dates, and look for CFUs (colony forming units) in the billions.

Anything less isn’t as useful. A good brand specifies the amount of live organisms, and lists the exact strains used in their formula.

HOW TO TAKE AND STORE

You should always store supplements in a cool, dark place. Most strains of probiotics are fragile and should be protected from heat, so refrigeration is typically ideal.

Each strain listed above is available in Asu Labs Advanced Probiotic Formula. It is packed with 30 billion CFUs, helps with bloating, digestion, weight loss, and more!